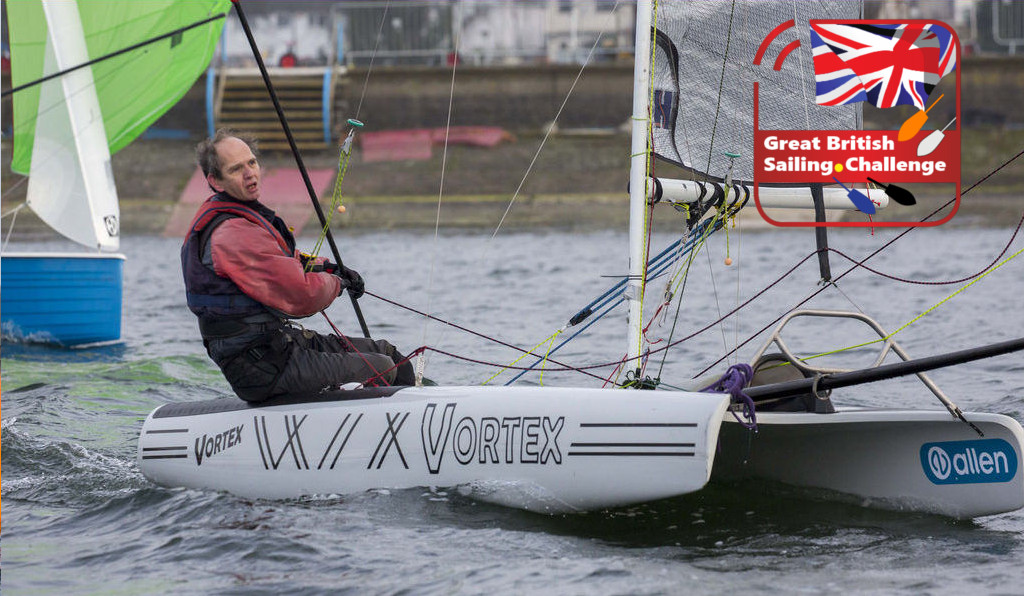 The forecast for the King George Gallop is promising a stern test this weekend on the North London reservoir. Just down the road from Alexandra Palace, where a couple of weeks ago all manner of dinghies and small cats and keelboats were on display, the goal of the Great British Sailing Challenge is to achieve the same kind of diversity on the water.

Enter Now   Using the latest version of the Great Lakes handicap numbers, a variation of the RYA PY system, along with GPS-based Dynamic Handicapping developed by SailRacer, this event and others in the Challenge aims to create as fair a playing field as possible for a wide range of boats. The Saturday schedule is three back-to-back handicap races with a Fast and Slow start three minutes apart, while Sunday concludes the regatta with a Pursuit Race.
The strong forecast for Saturday could suit Tony Burton’s Contender from the home club, and also another trapeze singlehander, Michael Iszatt in his RS600. Jonathan Carter’s Vortex will enjoy the strong breeze too. The reigning RS600 National Champion Richard Smith might be wondering if he should have signed on in the singlehander, although he’s down to compete with his 21-year-old daughter Ellie in the RS800. “We’ve done a couple of RS800 Nationals together when Ellie was a teenager,” says Smith, “but she hasn’t sailed the boat in a few years so it could be quite a big outing. She’s made of tough stuff though, she’s up for a challenge.”
The National 18s have proven very potent on the Selden SailJuice Winter Series, and Jessica Berney from Blackwater Sailing Club will be at the helm of her powerful 18-footer this weekend.
After 13 years out of the boat, co-founder of the Great British Sailing Challenge, Andy Rice, has been coaxed out of 49er retirement by 19-year-old 29er sailor Ewan Gribbin who has recently bought a secondhand Olympic skiff. With a 31-year age gap, Rice and Gribbin easily qualify for one of the sub-series in the Great British Sailing Challenge called the ‘Generation Game’, which encourages sailors of different ages to sail together. “Ewan asked me to sail the 49er with him,” explained Rice, who usually sails a Musto Skiff out of Stokes Bay. “It was nice to be asked, but now the challenge is can I actually remember what to do at the back of a 49er? It will be fun to find out if any of the old muscle memory is still there, and we will have zero training time together so King George will be quite a baptism for the new partnership.”
To join in the fun, enter at: www.sailingchallenge.org
Online entry closes this evening at 1159pm, 13th March.
Entry is available on the day for an additional £10 on top of the advance online entry.
One of many aims of the GBSC is to encourage boats of similar type to race each other on handicap, and some of the early performers from the winter were rewarded at the prizegiving held at the RYA Dinghy Show earlier this month:
Overall and Fast Symmetric        Sam METTAM/Tim SAUNDERS       Fireball
Fast Asymmetric        Colin/Olly MURRAY        Norfolk Punt
Slow Asymmetric        Jonny/Sarah MCGOVERN        RS200
Slow Symmetric        Alistair GOODWIN        Laser
Youth        Jack LEWIS/Fraser HEMMINGS        420
19-55        Sam METTAM/Tim SAUNDERS        Fireball
Master        Neil MARSDEN        420/GP14
Generation Game (open to sailors in singlehanders or crewed boats with 18 years or more age gap)
Gareth Hyland and sons, Eden and Josh, all sailing Blazes from Chase Sailing Club
GBSC Calendar 2018/19
Fernhurst Books Draycote Dash, Draycote Water Sailing Club
17 & 18 November 2018
Datchet Flyer, Datchet Water Sailing Club
8 & 9 December 2018
Brass Monkey, Yorkshire Dales Sailing Club
27 December 2018
John Merricks Tiger Trophy, Rutland Sailing Club
2 & 3 February 2019
Oxford Blue, Oxford Sailing Club
16 February 2019
King George Gallop, King George Sailing Club
16 & 17 March 2019
Weston Grand Slam
20 & 21 April 2019
Derwent Dambuster, Derwent Reservoir Sailing Club
11 & 12 May 2019
Wilsonian River Challenge, Wilsonian Sailing Club
1 & 2 June 2019
Bala Long Distance, Bala Sailing Club
22 & 23 June 2019
Mountbatten Centre, Plymouth
8 to 10 August 2019
Ullswater Ultimate, Ullswater Yacht Club
17 & 18 August 2019
Grand Finals, Rutland Water Sailing Club
28 & 29 September 2019
How do I get to the Grand Finals?
The Grand Finals of the GBSC are designed to celebrate the best of everything in small-boat racing in Great Britain. So there are many ways to qualify....
Finish in the top 10 of the travellers’ series (based on your best three results)
Top qualifiers in a number of boat categories:
Fast Asymmetric
Fast Non-Asymmetric
Slow Asymmetric
Slow Non-Asymmetric
Multihull
Sportsboat
Best Improver
Most attended
Any boat valued at less than £1000
Top qualifiers in a number of age and other categories, for example:
Youth (Under 19)
Master (Over 60)
Female
Two Generations (two people sailing together, minimum age gap of 18 years - could be parent/child but not necessarily)
There will also be a number of ‘wild card’ invites available based on various criteria.
Hang on, but what even IS the Great British Sailing Challenge?
It’s a series of handicap racing events that take place throughout the year, and it’s open to pretty much any sail-powered craft. The Challenge involve events throughout the whole year, running large regattas at a variety of inland and open water venues. Competing sailors will earn ranking points from each event they compete in, with the top 100 sailors invited to a winner-takes-all-final at Rutland Water in September, a celebration to bring together the best British sailors of the year.
Who came up with the idea?
The idea comes from the organisers of the Seldén SailJuice Winter Series which has been one of the big success stories of the past decade. Organised by Andy Rice of SailJuice.com (sailing journalist and marketer) and Simon Lovesey of SailRacer (event organiser and GPS tracking expert) has completed its 10th season.
www.sailingchallenge.org